What the knight focuses on is tanking the heroes attacks while being able to hold up on the offensive. It would be better to just focus on the weaker enemies and then focus on taking down the remaining knight(s). The knight would be a guard + humanoid with a good amount of defense because they are wearing heavy armor. The knight would start every battle with 1 cheeseburger and 1 juice.

The knight could possibly found in Ratzo Rocks.

You would be able to obtain their armor and helmet. You could get the sword in their hand in a swordpack. All corrupted variations of these items would be obtainable as well. 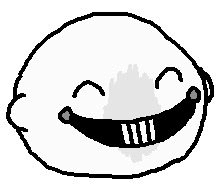